“My Education. On unusual muses and mentors. And how I had to teach myself everything in order to cross the class divide.” 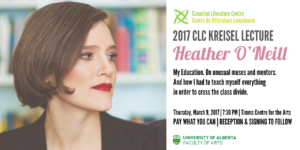 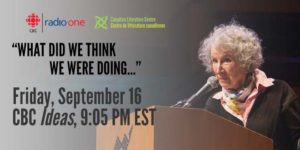 June 2, 2021 Comments Off on 2016 CLC Kreisel Lecture with Margaret Atwood 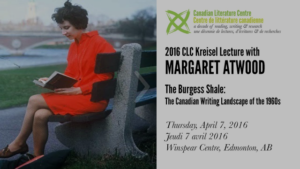 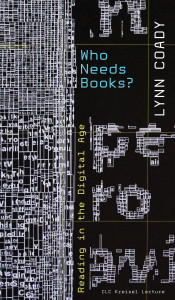 January 12, 2022 Comments Off on A Tale of Monstrous Extravagance: Imagining Multilingualism

Esi Edugyan’s new book Dreaming of Elsewhere: Observations on Home, from her 2013 CLC Kreisel Lecture is now available from the University of Alberta Press.

About the book: Home, for me, was not a birthright, but an invention.… It seems to me when we speak of home we are speaking of several things, often at once, muddled together into an uneasy stew. We say home and mean origins, we say home and mean belonging. These are two different things: where we come from, and where we are. Writing about belonging is not a simple task. Esi Edugyan chooses to intertwine fact and fiction, objective and subjective in an effort to find out if one can belong to more than one place, if home is just a place or if it can be an idea, a person, a memory, or a dream. How “home” changes, how it changes us, and how every farewell carries the promise of a return. Readers of Canadian literature, armchair travellers, and all citizens of the global village will enjoy her explorations and reflections, as we follow her from Ghana to Germany, from Toronto to Budapest, from Paris to New York.

About the author: Esi Edugyan’s most recent novel, Half Blood Blues won the 2011 Scotiabank Giller Prize and the 2012 Ethel Wilson Fiction Prize. It also won the 2012 Anisfield-Wolf Book Award, which recognizes books that have made important contributions to our understanding of racism and our appreciation of the rich diversity of human cultures. The novel was a finalist for the 2011 Man Booker Prize, the 2012 Orange Prize, the 2011 Governor General’s Literary Award for Fiction, and the 2011 Rogers Writers’ Trust Fiction Prize. Her debut novel, The Second Life of Samuel Tyne, was published internationally to critical acclaim. Her work has appeared in several anthologies, including Best New American Voices 2003. Edugyan has held fellowships in the U.S., Scotland, Iceland, Germany, Hungary, Finland, Spain and Belgium. She lives in Victoria, British Columbia, with her husband and daughter.

Reviews: Find a new review of Dreaming of Elsewhere in Foreword Magazine at ca.zinio.com

Dear Sir, I Intend to Burn Your Book: Anatomy of a Book Burning

About the book: In 2011, Canadian writer Lawrence Hill received an email from a man in the Netherlands stating that he intended to burn The Book of Negroes, Hill’s internationally acclaimed novel. Soon, the threat was international news, affecting Hill’s publishers and readers. In this provocative essay, Hill shares his private response to that moment and the controversy that followed, examining his reaction to the threat, while attempting to come to terms with the book burner’s motives and complaints. Drawing on other instances of book banning and burning, Hill maintains that censorship is still alive and well, even in this age of access to information. All who are interested in literature, freedom of expression and human rights will appreciate this passionate defence of the freedom to read and write.

About the book: In March 2011 the Canadian Literature Centre hosted award-winning novelist Annabel Lyon at the 5th annual Henry Kreisel Lecture. Annabel Lyon’s passion for historical novels and her love of ancient Greece make her lecture on the process of creating characters of historical fiction captivating. She discusses the process of wading through historical sources - and avoiding myriad pitfalls - to craft believable people to whom readers can relate. Finding familiarity with figures from the past and then, with the help of hindsight, discovering their secrets, are the foremost tools of the historical novel writer. Readers interested in the literary creative process and in writing or reading historical fiction will find Lyon’s comments insightful and intriguing.

About the author: Annabel Lyon, a Vancouver-based fiction writer and teacher, is the author of several books, including her acclaimed historical novel, The Golden Mean.

Eden Robinson’s March 2010 lecture is now available, with Introduction by Paula Simons. “I was born on the same day as Edgar Allan Poe and Dolly Parton: January 19. I am absolutely certain that this affects my writing in some way.” — Eden Robinson

Publishers: co-published by the University of Alberta Press Press and the Canadian Literature Centre

About the book: In March 2010 the Canadian Literature Centre hosted award-winning novelist and storyteller Eden Robinson at the 4th annual Henry Kreisel Lecture. Robinson shared an intimate look into the intricacies of family, culture, and place through her talk, “The Sasquatch at Home.” Robinson’s disarming honesty and wry irony shine through her depictions of her and her mother’s trip to Graceland, the potlatch where she and her sister received their Indian names, how her parents first met in Bella Bella (Waglisla, British Columbia) and a wilderness outing where she and her father try to get a look at b’gwus, the Sasquatch. Readers of memoir, Canadian literature, Aboriginal history and culture, and fans of Robinson’s delightful, poignant, sometimes quirky tales will love The Sasquatch at Home

Dany Laferrière’s March 2009 lecture, I Write as I Live. Introduction and Foreword are in both French and English.

About the author: Unconventional, controversial, prolific and immensely talented, Dany Laferrière was born in Haïti and adopted Québec as his new home. He achieved critical fame with his first novel, How to Make Love to a Negro Without Getting Tired. With humour and clarity, his work examines Haitian, Quebec and North American society and inter-racial relationships.